Better Versions of Things You Got for Christmas

So let's say that, hypothetically (completely and totally hypothetically), your family has no clue what to buy you for any occasion, so they buy what they think they should be buying you. Sometimes it's things along the lines of “Oh, you watched a Big Bang Theory once, let's buy you every piece of Hal Jordan merchandise we can find (when clearly it's John Stewart or get out of here, grandma), or some of those rad space Lego sets when you have the manual dexterity of a horse wearing gloves so it looks like it has fingers. Either way, you fake a smile and try to love the effort and the thought, even if you're secretly searching for a gift receipt while you do it.
There are a lot radder things you could get for Christmas, things you would be proud to display on the crooked Ikea shelf that holds all of your most important things.

In keeping with the recent Star Wars mania, you could get the old Jabba the Hutt toy that oozes goo, which is both economically priced and cool as hell. IT'S A GOO JABBA. It has so many uses once you use up all of the goo! You could keep it in your kitchen, and use it as the world's greatest ketchup dispenser. The world isn't going to run out of ketchup, so this present will last so long that it can become a family heirloom! 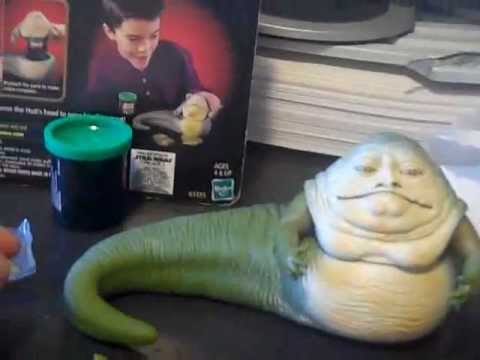 Or, if you're not into Star Wars, but you still really like monsters, trade in those incredibly warm and nice LL Bean slippers for a pair of monster feet ones! They even sell ones that leave realistic monster tracks, assuming you don't own any other shoes and wear them everywhere you go! Is that Bigfoot? No, that's just Chad buying some dignity!

If you get socks in your stocking (the one true holiday turducken), and for some reason are a member of the Anti-Sock Coalition, you could trade them in for mittens. Mittens seem a bit too close to socks to be acceptable under the by-laws, but feet don't (usually) have thumbs, so you're safe. And everyone loves mittens! What other piece of clothing's purpose is to keep you warm by making you useless, but also lets you pretend to be a Muppet? I mean, yeah, you could just make a sock puppet, but think of the effort involved vs the “work is all done just jam me on your hand” mitten status. You might not be able to do anything, unlike when you wear socks, but gosh darnit, you're sticking to your principles and wearing muppet-hands.

You know that aunt that always knits you those hilariously weird sweaters? Stop hiding those in your closet if you own those majestic piles of tragedy as a Pizza the Hutt cosplay! You'll be the hit of every comic convention you go to if you just wrap yourself in 5 or 10 of those things and go around the dealers' hall like the perfectly goopy creature you are! Cosplay is 75% repurposing anyway, so you're just being one of the guys!

In the spirit of repurposing, there's always someone who gives you a giant box of those twisty nail puzzles and insists that you do one of them to show everyone how smart you are. They're impossible! There is no earthly way to solve them! So, instead of driving yourself into some sort of creepy movie-style madness trying to solve a puzzle that claims to be for children, use them as weapons! Become the twisty nail puzzle-ninja! Nobody will ever mess with you again, even if you do jingle more than a child who discovered pennies, because do you know the things you could do with those? You will be the scourge of the underworld (or the king of the underworld, if that's your jam). Yes, trying to find uses for Christmas presents that aren't what you wanted is a bit difficult, but if you try, you can come up with some really awesome ideas. Every present can be amazing if you look at it properly, even if it's gloves with 8 fingers each (the duels you challenge people to would be SO THREATENING), or hemp sandals with attached socks (think how much time you would save getting dressed in the morning!), or even a pet goat to live in your studio apartment (have you ever seen a video of a fainting goat? Who doesn't want to wake up and start their day by making a farm animal faint? That's the definition of playing God right there, and I know because I've played Goat Simulator). Presents aren't about how they're supposed to be used, they're about what you make of them and of the love they're stuffed full of, like boxes of love and inspiration and complete and total nonsense.