You've been swatting away Star Wars spoilers like malaria-carrying mosquitoes, holing up in an underground bunker where no ill-timed online reveals can ever find their way to your eyeparts. But this is your buddy Ryan talking, and I know that even in your sunless compound nestled beneath the dirt, you're still visiting Ultimate Coupons for sweet deals on shoes or airplane tickets or whatever. There are no secrets between us -- not even these probably-accurate and 100% hypothetically true spoilers for The Force Awakens. You heard 'em here first.

I don't know how to break this to you gently, because you probably squeaked like a happy fruit bat when you saw photos of Harrison Ford decked out once more in the iconic costume, but the first ten minutes of the film are devoted to Han accidentally getting his foot caught in the grates of the Millennium Falcon's cargo bay while mynocks nip him to death in real time. There's a stinger after the credits where Chewie kneels by his buddy's body and howls, heartbroken, trying to make Han get up again. He stays there forever.

2. Dengar is the Real Protagonist

When they told you that the Star Wars Extended Universe was toast, it was all a ruse. ALL of it is true. Jacen and Jaina Solo, Prince Xizor, The Second Battle of Coruscant, the whole bit. And he wouldn't admit this in interviews, but JJ Abrams was absolutely obsessed with Dengar, a minor bounty hunter who only appeared onscreen briefly during The Empire Strikes Back and was never mentioned again. Dengar is Abrams' boy. Luke and Leia and the rest of the gang are only bit-part players in Dengar's story as he attempts to rid his body of the cybernetic implants that impair his empathy and compassion. You thought you were getting explodey space opera? Guess again, bud -- you're getting full-on "what does it mean to be human" ruminations from a pile of hotel laundry holding a gun.

3. They Reveal the Name of Yoda's Species

After years of inexplicably not having a canonical name for Yoda's species of swamp-crawling big-eared Force muppets, JJ Abrams and company reveal that the actual species name is Bigeardian. This name was devised by George Lucas himself, who disappeared into the woods near Skywalker Ranch for several days of meditation, eating nothing but berries and frightened interns. "Bigeardians!" he finally shrieked, and as he ran naked back to the Ranch to write it down, he also decided that Darth Maul's makeup was actually the result of childhood sadness. A new series of pre-prequels percolated in his wretched, bearded head. The earth trembled very gently. 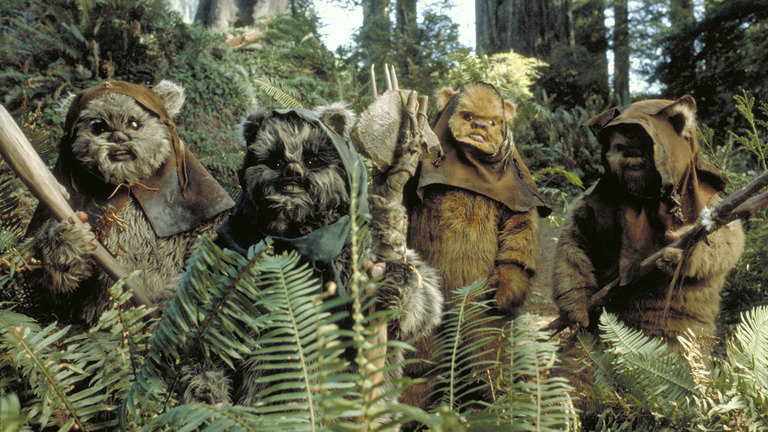 Now, you realize that the Ewoks were actually going to eat Han, Luke, and Leia, right? They had the fire going and everything, and if it hadn't been for C-3PO's divine intervention, the Ewoks would've chowed down on our heroes without even thinking about it. In The Force Awakens, this point is hammered home when an Ewok infestation breaks out on Yavin IV, flooding the Rebellion's old homestead with thousands of fuzzy murder bears. In a final act of desperate courage, Luke sets off a thermal detonator and sacrifices himself to keep them from spreading their tiny, terrible hunger to the stars. The movie closes on one little paw bursting through a pile of rubble. Yub nub. Because greasy Star Wars fanboys are still obsessed with the Slave Leia costume in 2015, the makers of The Force Awakens realized that there was gold in them there hills, and they've introduced a new costume to keep sci-fi cellar-dwellers talking for the next 30 years. Meat Leia: She's covered head-to-foot in a wide variety of intergalactic meats, wampa and bantha and bordok and dianoga, their bizarre flesh draped across Carrie Fisher like a Snuggie. She will stare at the camera for ten silent minutes, moving only occasionally to rattle the meats for the benefit of those viewing it in IMAX 3D.

I'm so sorry that I had to be the one to reveal all of this to you. In an effort to console yourself, head over to ThinkGeek's page on Ultimate Coupons and get amazing deals on Star Wars merch. I recommend the tauntaun sleeping bag, which is surprisingly effective at absorbing tears.

Your Survival Guide to Last-Minute Shopping