The Addams Family Kill Count By The Numbers

It can be hard to tell through their one-liners and their dark charms but The Addams Family is easily the most prolific group of serial killers in in known history. Wikipedia lists the runners up, The Philadelphia Poison Gang, at 114 proven victims. Over the course of a mere 11 months (starting around Christmas time and ending on Halloween night) the ghoulish clan does in at least 1,076 unsuspecting souls.

Let's break it down, one murderous incident at a time.

Murdered by: The whole fam damily
Cause of death: Boiling concoction

We see a total of 14 carolers at the base of the family's house. We never see them leave. Though it's Lurch that pulls the proverbial trigger it's clear that dealing in death is a family affair.

Cause of death: Vehicular manslaughter
Murdered by: Pugsley

You can hear three distinct vehicles crash when Pugsley returns with the stolen stop sign. One sounds like a big truck, likely driven by a single unfortunate trucker, the other two like sedans let's presume with at least a driver and a passenger each for a total of 5 slain by Pugsley's sticky sign fingers.

Cause of Death: Head on train collision / derailment
Murdered by: Gomez

This is where the majority of the body count comes from. But it's not just the number of tiny lives lost that makes this their most sinister moment is that these poor people are clearly on their nightly commute back to their itty bitty homes after a day at their itty bitty offices.

We only get a brief glimpse inside the train and it's sparsely populated. So if we assume each train is half empty and, using this vague Answers.com assessment of how many seats their are in a train, there are 1,052 seats filled between the two trains (plus the two conductors) that means 1,054 little lives were lost. 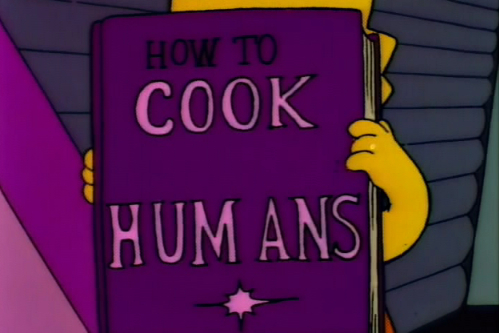 Cause of Death: Cannibalism
Murdered by: Grandma

While it's hinted at early on that Grandma's home cooking was/is on the sentient side it's confirmed when we get a glimpse of her pouring over The Joy of Cooking and Gray's Anatomy. We only see this happen once but this meal is probably not an isolated incident.

Cause of death: Buried alive
Murdered by: The Addams Family

When the 2 "villains" (they may have been moneygrubbing jerks but as far as we know their collective kill count is 0) of the piece are promptly interred via book hurricane it get a little muddled about who to give credit to. Fester, who unleashed the hurricane? Wednesday and Pugsley, at the ready to bury two fellow human beings alive? But clearly if they had two tombstones engraved and ready to go this is something the whole family would have had to know about ahead of time. This premeditated conspiracy of death is clearly a family affair.

Truly the family that slays together stays together. But if you're looking for a less deadly way to blow off steam as a family unit check out Hotwire.com for great deals on relaxing getaways everyone can enjoy!

5 Movies That Were Totally Cursed