Candy is a universal constant. The geopolitical theater may be fraught with tension and distrust, but the one thing we have in common (aside from an apocalyptic urge to press the button and bomb the world into a smoldering crater) is tasty, tasty candy. It's like one of those Live Aid kumbaya videos, but drenched in syrup and wrapped in cartoon animals on skateboards. There's no wrong way to do candy, except when there is, and it ends up as something that should have been banned by the Geneva Conventions.

I don't care that the gummi shrimp is raspberry-flavored. I don't care. Listen to me -- "Shrimps and Bananas?" What other unholy combos did the crazed, desperate weirdo who created Shrimps & Bananas come up with before arriving at this? Chorizos & Cherries? Mangos & Muttons? My feelings on this abomination can only be summed up as follows: 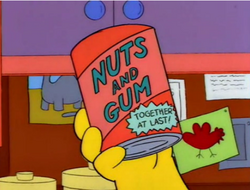 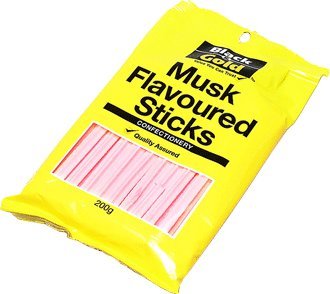 Australia has many things to answer for: Yahoo Serious, Foster's, and poisonous flying plants with knives. But "musk flavoured sticks"? Literally they are sticks of musk. The package is stamped "quality assured" with a little check mark next to it, which I assume means that a grizzled old Australian dude with an outfit made out of tanned dingos nodded grimly at his Musk Sticks and went "Ayup. Musk Sticks."

Listen, Rad Sunglasses Duck, I don't care how cool you want me to think this salsa-flavored spaghetti candy is. You're hanging ten on a wave of deception, my friend, and you're juggling a lot of flavors that I'm not convinced you can catch -- spicy salsa, spaghetti, and watermelon? If you're determined to take this hellride, 2 XTreme Duck, it's a place I can't follow. It's a place I won't follow, because I have convictions and beliefs, and I don't try to sell people things like Strawberry Gummi Sriracha-matzos. I'm not a monster like you, Cool Skateboard Duck.

This is the final boss battle of gross candy. It's been described as smelling like rotten onions, feet, and turpentine, and it's been banned from public transportation, hospitals and hotels in Singapore. If you enjoy the taste of durian candy, I'm curious about whether it's an acquired taste for you, and also whether the width of your tongue is mostly scalded-over scar tissue. You are a human parlor trick, and I respect and fear you in equal measure. 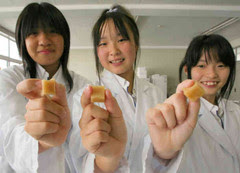 This candy is literally, actually, in reality made from 6-foot-long jellyfish. Why was this thing done? Who took it upon themselves to turn an aquatic bag of hatred into a cookie? Are there chocolate-coated poison dart frogs available for people who want to tempt fate by turning nature's nightmares into candy? It's "jellyfish and caramel flavor." Oh, thanks. Thanks for the caramel, Mephistopheles.

Drug candy. Candy that is drugs. This is the cyberpunk dystopia we all live in now, and we're just gonna have to make peace with that.

October (or "month-long Halloween") is upon us, and you're going to need an assortment of masks and decorations to effectively lure people into eating whatever horrifying candies you've managed to acquire. Head over to Halloween Express on Ultimate Coupons and find the best deals to help you become the high-fructose menace you always aspired to be.

5 Houses Not To Trick-Or-Treat At

10 Reasons I Believe My House is Haunted