Pitchfork album reviews are a thing of wonder. Crammed full of bizarre metaphors and postmodern adjective abuse, their outlook on music will never make either their dads nor Steve Albini love them. While sobbing over the latest Radiohead album into a microwaveable meal, this is how I believe they'd describe their half-defrosted dinners:

"This righteous flaky little puck of meat and coagulated veggies is hot when it comes out of the microwave, but you won't mind when it scalds the roof of your mouth, because Marie Calendar's meat pastries have an almost narcoticizing effect to numb the chicken-'n'-cheese fire. You can't feel anything that your piping-burning-screaming-crooning bacon friend doesn't want you to feel. It's like a guitar solo played by a magma-slathered Ry Cooder -- when its blistering fingers fling the burning-hot filling right into your facehole, all you'll be able to do is cry and smile and choke. It's 1040 calories, so invite a friend to share it with you, but don't actually share it -- stare at them and chew like a basset hound with a mouthful of roasting spackle."

"We're no strangers to sweet-and-salty mashups. The coy pairing of sausage and syrup is like playing Lou Reed's "Metal Machine Music" and "Tiptoe Through The Tulips" at the same time, but backmasked and sped up to 160 b.p.m. in your mom's garden shed. Just when you think the umami of the sausage links can't possibly get any louder, out comes a salvo of syrup salvation, BAM, breakfast party for one in the dance hall of your face. Sometimes when you throw a party, you don't want to invite everyone you know because maybe Davey Beans from the record shop won't get along with your grandma on kidney dialysis. But cover them all in syrup and bring in the meat and see what happens. Breakfast is served, clownholes."

"The fish pops, there's no doubt about it, and the cheezy, breezy, broasted chips round out this bad boy's sound. Is the cheese too much? Is anything too much? The popcorn fish has done its homework -- it knows when to pull back, it has good instincts, it knows that minimalism isn't the taking away of elements but the addition of just the right ones. If a seadog reeled a super-tasteful couch into his partyboat and breaded it up with crunchy upholstery, you could sit on it and watch the roiling waves waving hello as the cheese-spattered chips bubble up out of the fishcouch and keep you warm at sea. 10/10." 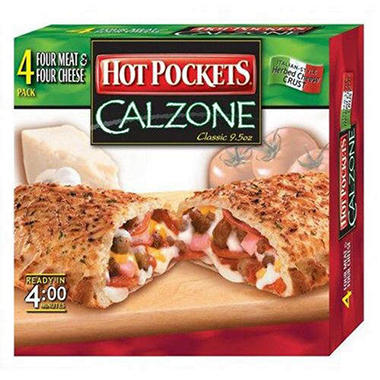 "Calzones are so simple that we forget mad quick how hard they are to make, how much goes into these bubbly sausage-infused jam sessions. The cheese melts, but you already knew that -- it's the sauce that saves it, tangy like an Italian kid that doesn't know where his mom is, face puckered like the pizzeria is his home now and he has to learn how to sweep the floors. It says to microwave it for four minutes -- heck on that, son! Microwave this tasty little rebel for twelve minutes and watch your microwave melt down in a rapture of screaming meat, like a Rick Rubin collabo with Barry Manilow and Cannibal Corpse. Also they used Papyrus font on the packaging and I cried for two hours or whatever."

You deserve better than microwave purgatory -- get some coupons for Food Network and want better for yourself. And stop listening to Neutral Milk Hotel. It's 2015, for God's sake.