Are you having a bad day? Maybe your hair didn’t curl right, you spilled coffee all over your new pair of pants or you forgot to bring the notes for your big presentation at work today. You may be feeling like the lowest form of life on the planet. But don’t get too down on yourself. No matter who they are, everyone has days that are just epic fails, even rock stars. Check out these ten times your favorite artists probably wish they had just stayed in bed with the covers over their heads.

It’s one thing to trip and fall, but to do it at the Met Gala in front of worldwide press and every other A-lister in the world? Jason Derulo may never live this down, but kudos to him for somehow managing to land completely on top of his head. How is that even possible?

Maybe it’s a rough life; I don’t know. But it seems to me that as a music diva, your only job is to lip synch to a pre-recorded track once in a while, so maybe you could get that right. Apparently not. Don’t worry, girl, the Twinkies will still be there in your dressing room when you get back. Focus!

Thank goodness the world has Kanye West to play the critic for us. Of course, we all want to hear his opinion on who should win, rather than hearing from the actual artist who won. Thanks, Kanye. What would we do without you?

4. Iggy Azalea Wears a Bird’s Nest to the Grammys 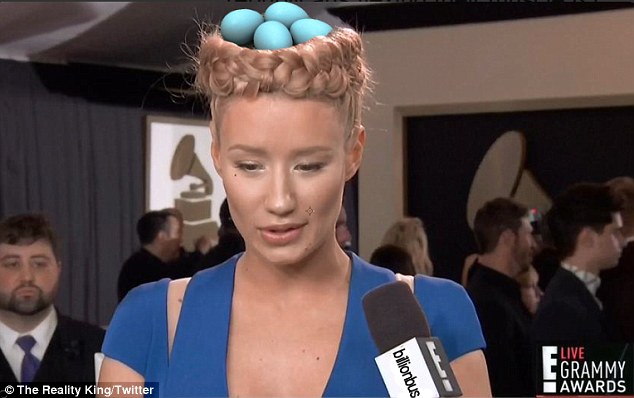 I get that musicians want to make a statement, but what exactly was she trying to say here? That she’s a bird brain? This hairstyle didn’t actually have eggs in it, they were just photoshopped in. It would have actually been cooler with the eggs, and even better yet if they’d hatched and flown away. Go big or go home.

5. Lady Gaga Gets Eaten by Her Own Hair

Lady Gaga is well known for her outlandish costumes, and we’ve come to expect nothing less. But even she might have re-thought this mass of hair that seems to have consumed her. She looks like the Queen of Hearts mated with a Saint Bernard. Yikes! Is that what she calls a Poker Face?

Believe it or not, Gaga was probably sober when she donned that hairy getup, but Jessica Simpson was definitely not during this interview with Extra. Did she really just say that her daughter’s boyfriend is her father? I think so, but she’s slurring her words so much, it’s hard to tell. And at the Teen Vogue Fashion University, no less. Way to set a good example, Jess.

How NOT to win fans and influence people, Robin Thicke edition. First, break up your marriage and family by cheating on your beautiful actress wife. Second, spend the next year whining, apologizing, and begging forgiveness in public. Third, release an entire album of said whining and begging. Oh, and somewhere in there make time for simultaneously giving gross "pick up artists" an anthem and plagiarizing Marvin Gaye. Thicke is just ick.

8. U2 Force Feeds its Album to Millions

Remember when U2 was cool? Before Bono’s ego needed an entire stadium all to itself and the band became focused on marketing their image instead of making music? Their latest release was automatically ‘gifted’ onto the playlists of millions of iTunes users, who appreciated it about as much as a punch in the eye from Chris Brown. Epic media fail.

9. Justin Bieber Peed in a Bucket

What will Justin Bieber be remembered for? Probably not his music. More likely for morphing from a sweet, baby-faced crooner to a walking disaster who likes to throw eggs at his neighbors and pee into a custodian’s bucket.

Kanye has so many fails that it was impossible to pick just one. I’m sure we’re all thanking our lucky stars that Kanye has also taught us all how to dress by branching out into fashion design. Apparently he took the story The Emperor Wears No Clothes as his muse. These will go over great in the office. I can’t wait to spend thousands of dollars to look like I actually just forgot my clothing.

So you see, even your favorite (and some not-so-favorite) artists have bad days, but their good days more than make up for it. Pick yourself up and head over to CD Universe to remember why.